As your bellwether (and expert!) I suppose it falls on me to comment on the ‘scientific advice‘ that supposedly underlies the political (mis)management of the current pandemic of Covid-19 afflicting some unfortunate sections of the human population (the old, already sick, the obese, and those of non-white race). 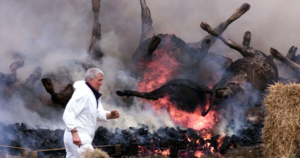 Well, it strikes me as a montrous giant arse covering exercise by certain government scientists who probably and should know better (none of whom are qualified expert virologist scientists at all!). It was, after all, government scientists that authorised the mass extermination of us cattle in 2001 in the so-called foot and mouth viral epidemic. Foot and mouth, although very unpleasant, is not actually lethal (for most of us cattle) nor is it transmitted to humans, so why did they kill us all leading to the dreadful mind-numbing spring-time for Hitler silence of the lambs? Was there a world-wide frenzied search for a cure or vaccine at the time? Forget it. This is a question we, in the cattle fraternities, have been asking since I was a lamb pining for a lost mother taken away in a cattle truck. As was the case then and now, the (farming) economy was ruined and whole populations traumatised. This is hard to forget or forgive. 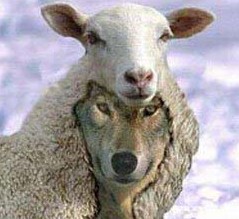 So whose fat arses are being covered and why? The Prime Shepherd? The Politicians? The Experts? The Scientists? The Media? Every statement and every rule imposed by these people is now prefaced and excused by the meaningless phrase ‘scientific advice‘. Every accusation of rule breaking is made as ‘not following the scientific advice‘. It’s bullshit! (apologies to our bovine friends). Government ministers, officials and kompromat indispensible advisers (sic!) can pick and choose ‘scientific advice’ from various sources and will invariably choose the advice that best suits their purpose and best ‘covers their arses‘.

In my flock I have an eminent ewe who has a doctorate in immunology and decades of research lab experience (sheeple can be very learned and educated you know!) and she could, if consulted (and she has been), give expert scientific advice tailored to whomever she was being paid to advise. Like her, I am expert in covering my arse with provisos, ifs and buts, fancy graphic projections with huge error bars, statistics and technical scientific mumbo jumbo. Very like political opinion polls in fact! Never would she or I recommend a course of action! God forbid! All in the scientific community have watched the entire series of Yes Minister over and over again! Required training.

Yes sheeple, it’s not the scientists or experts who make or have made the decisions and the rules to lock you down or not lock you down or to expose you for herd (sic) immunity. It’s the politicians aided and abetted by the Media following scientific advice from Government scientists! Of course.

See you on the other side of the fence, boyos!

The memories of our Editor Phil Parry’s extraordinary award-winning career in journalism as he was gripped by the incurable disabling condition Hereditary Spastic Paraplegia (HSP), have been released in a major book ‘A GOOD STORY’. Order the book now!

If you need something to keep the kids entertained during these uncertain times (in Welsh) try Ffwlbart Ffred about the amusing stories of Ffred and his pet.