It has come to my notice and I note with grave displeasue that some of you have been seen on Thursday evenings at the gates of your pens clapping the farmer and his veterinary assistant as they were passing with their dogs.

In this sermon, I want to talk about antibodies. What antibodies? Antibodies against the current virus spreading through the human population (not us for once!). However although there is no danger to us cattle from the actual virus there is serious danger to us from Pharmaceutical companies raising huge quantities of antibodies in us for use in test kits.

My whistleblowers in the various immunology labs across the globe have told me of the shockingly vast numbers of fellow sheeple, rhesus monkeys and rabbits  (unwanted dogs and cats from animal rescue pounds) that have been used for raising the antisera needed by these test kits that have been promised by governments to the humans.

My concern is not that we may be exposed to the virus itself but to the toxic chemical adjuvants that are used and injected into us (subcutaneously) along with the virus particles to overstimulate our immune systems to produce the antibodies used in the kits.  What are adjuvants? I list some of them below.

The incidence and severity of weeping sores and painful scabby wounds caused by these adjuvants is huge. This is not a good way for us to live or die. At least in the abbatoir it is a quick and merciful bolt from the blue. In these BigPharma labs it is endless painful suffering with sores and blood sucked from you periodically leaving you feint, dizzy (so I’m reliably informed by an escapee) and close to death for weeks on end. There are also reports and rumours that our fellow creatures are being bled out and drained completely of blood if useful high specificity antibodies are detected.

If you really want to know the methodology it is shown in the figure below. 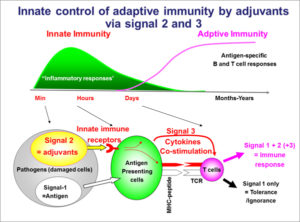 It’s enough to make you join the Animal Liberation Front!